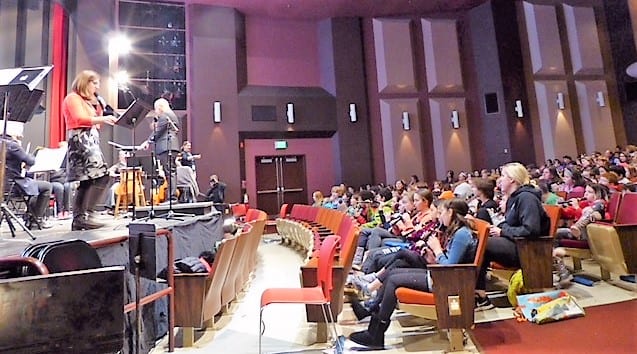 Violins, trumpets, flutes, bassoons, cellos…and recorders! In January 2019, all fourth and fifth grade students in the Juneau School District attended the annual ‘Music in the Schools’ concert, sponsored by the Juneau Symphony and Any Given Child. This year, some 800 students were bused to Juneau-Douglas High School for an interactive concert inspired by a special curriculum developed by Carnegie Hall’s Link Up program.

Juneau’s elementary music teachers collaborated with the Juneau Symphony to craft a program where students performed with the local orchestra. The concert featured music from Tchaikovsky to Duke Ellington, and included three pieces which the fourth and fifth graders had been working on since the fall in their music classes. From the audience, the students sang and played their instruments, including recorder, violin, and cello, as the notes were projected on a screen above the orchestra.

The students were thrilled and proud to have the opportunity to play alongside the adult symphony and their peers. For many students, this was their first concert experience. One teacher from Harborview Elementary School noted that her students “learned lots! Many of them learned that a symphony is something [in which] they can participate and see– in their town.” After the performance, a fifth grader from Riverbend Elementary School explained “it was cool how everyone was making beautiful music at the same time.” A Mendenhall River Community School student shared that the music made them feel “energetic, happy, like I want to join the symphony!”

Have a story to share from your own school/district? You can either fill out this Google form, or simply send Sam Jordan content directly to work up a post.  We are looking for posts of no more than 500 words, accompanied by 1-2 pictures if available. If you need ideas, check out this doc https://bit.ly/2HDqyGx